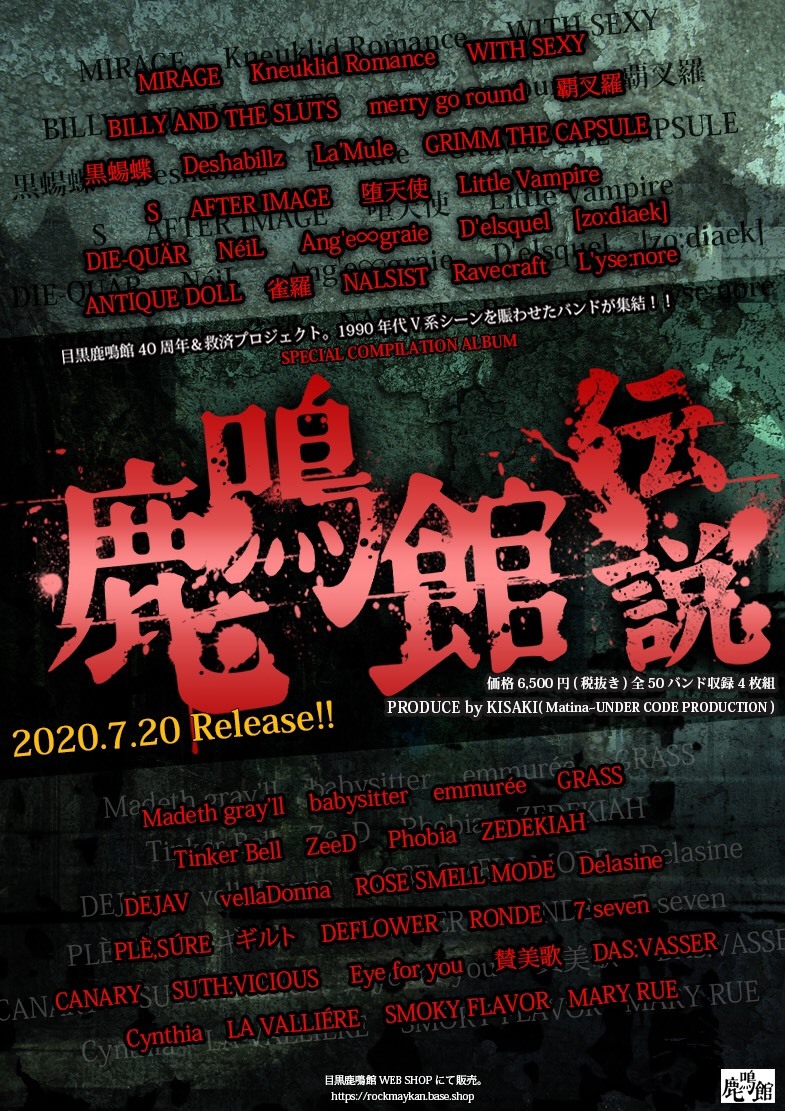 "ROCKMAYKAN Densetsu (鹿鳴館伝説)" is a special 4-disc omnibus coordinated and produced by KISAKI (Matina~UNDER CODE PRODUCTION) to support livehouse Meguro (目黒) ROCKMAYKAN (鹿鳴館) during the coronavirus era, and to celebrate its 40th anniversary. it features tracks (some rare, some remastered) from bands which represent the breadth of the 90s era of visual kei.

Please note that only a minority of tracks included are disclosed as of yet.

Bandmen upon bandmen have decided to join the ROCKMAYKAN 40th Anniversary & Relief Project, a project which hopes for the continuance of Meguro ROCKMAYKAN, so that they can greet the 40th anniversary of this beloved place where they have been raised with smiles on their faces. KISAKI too, who has coordinated this 46-band, 4-disc omnibus album by the name of "ROCKMAYKAN Densetsu" as its producer, could be said to be an indispensible person if one were to talk of Meguro ROCKMAYKAN. He is the person who has aggressively pushed forward with this project.

Looking back - ever since he first set foot on Meguro ROCKMAYKAN's stage with La:Sadie's, KISAKI has continued to appear on stage there with bands such as MIRAGE, Syndrome, Phantasmagoria, and LIN (凛 -THE END OF CORRUPTION WORLD-), filling the venue to capacity with a great amount of people.

Speaking of Meguro ROCKMAYKAN's progress throughout the ages, its friendly relations toward the visual scene of the 90s cannot be overlooked. As the 1990s approached their latter half, new labels other than the large labels who could be said to be the centre of the visual scene until then (examples of the latter being labels such as EXTASY RECORDS, Free-Will, DANGER CRUE, and Tears Music), sprung up one after another. Labels such as noir, Anarchist Records, KEY PARTY, Soleil, Kreis Sequence Factory, Inc., L∞p・Ash RECORDS all formed .

At the same time, KISAKI - the producer of this work - founded the prominent Kansai label Matina. With the bands that he personally lead (MIRAGE and Syndrome) at the core, bands such as Madeth gray'll, DAS:VASSER, vellaDonna, and VIDOLL appeared one after another and adorned the Kansai visual kei scene. In Kanto, the Saitama livehouse Urawa Narciss released music from bands such as PIERROT and NALSIST. As labels ranging from those with livehouses as their focal point to those who individuals had started up came into being, it was very much a period of small-scale rivalry between different bands and labels.

Even in the midst of all that, Meguro ROCKMAYKAN's status as a place which bands aimed for, a Holy Land which must be conquered, remained unchanged. It persisted as a proudly independent entity.

Of course, there have been many bands which have held oneman performances on Meguro ROCKMAYKAN's stage, who have crammed the venue full to the brim, who have proceeded on to perform at more towering stages. All of the included bands - the labels too - have accomplished things at Meguro ROCKMAYKAN. They have continued to perform with the goal of leaping even greater ahead.

This style, which should be said to be "conventional", continues to be prevalent even among visual kei bands today. Even now, Meguro ROCKMAYKAN is a place where bands come to gain self-confidence by playing regular lives, a place where they receive their medals as bands who possess ability. Furthermore, when a band can hold a oneman performance there, it is proof of their ability and popularity. The fact that it is a place where they can finally prove their ability and mobilisation when that performance is a success, and obtain their credentials as a fully fledged band, is a fact that remains unchanged.

The group of 50 bands which are included on "ROCKMAYKAN Densetsu" are all bands who have added flair to Meguro ROCKMAYKAN during the 90s, when it was the most lively. Back then, as various visual kei events seemed to be held day after day, more and more oneman performances were also held as the venue hosted release celebration and tour final performances. If one walked down the stairs toward the dressing rooms, many bandmen who did their hair and make-up in the two not-so-wide dressing rooms and in the corridor would speak to each other in wait for their respective performances, and form ties with other people of the same mind. There, sentiments attempting to bring energy to the scene together, repeated time and time again.

The fact that KISAKI, who continues to be bound to shoulder the history of visual kei due to the activities of his own, is the reason to why this work, which surpasses the boundary between bands and labels, came into being is one of his great achievements.

It's also due to the people who endorse of his extensive personal connections and popularity. Similarly, this work was created through the label owners and bands who love Meguro ROCKMAYKAN raising their voices in aid.

Simultaneously, the people who livened up the visual scene of the 90s are not just looking back at those times. Precisely because so many want to see the brilliance of that era through their own minds, the atmosphere of this era is compressed into this work. No, rather, this work was made to be a vivid slice of an era.

It seems as though there is an atmosphere of revitalization in the current visual scene. Yet, I still think back upon the fact today, that the indescribable enthusiasm of which Meguro ROCKMAYKAN was the focal point of in the 90s was the primary cause to the visual kei scene's revitalisation and its subsequent worldwide growth of which its acknowledgement as a genre is a part.

I hope that those of you who have lived through the constant, stuffy, enthusiasm of the atmosphere of those days and let it diffuse throughout your bodies, will feel the nostalgia of this work in your hearts. For those of you who haven't experienced the bands and scene of those days, but instead perceive it to be a piece of scenery what has been, I want to convey these feelings of liveliness as you experience the feeling of longing in this release.

All of the proceeds from this work will be donated to Meguro ROCKMAYKAN.

I hope that you all can extend your hands in aid. Not only, of course, to safeguard this Holy Land which must not be lost, but also so that the legend of this place can continue on.

No comments yet.
exist†trace new mini-album: “The Only Garden” Astaroth new look and MV spot
vkgy © John (inartistic)
SINCE 2004